Lenore and Jack were both dating different people when they met online, they were both seeking something different that they weren’t getting from their respective relationships. They clicked very well on the first date and ended up at Lenore’s flat where they drank a bunch of tea and ended up having sex three times before Jack had to get home for work in the morning. Over the next few days, they went out a few more times and ended up liking each other so much they became a couple. About 6 months later they moved in together!

Their most adventurous sex story happened in early fall this year. They'd gone out with a girl together, but nothing sexual happened. She invited them to the shop she worked at for some live music and drinks. Shortly after Lenore and Jack showed up, she was all over Lenore. The two of them made out and grab assed on Jack’s lap. They wanted to find a place to fuck, but the only bathroom in the shop had too many people coming in and out for them to get away with that while she was working. They went to a changing room when no one was looking and fooled around meters away from her co-workers, guests and the band. They were almost caught several times since the changing room was only a curtain that barely closed. Hands went everywhere and she went down on Lenore while Jack was fucking her from behind. This went on for maybe 40 minutes before a beer delivery arrived and the girl had to poke her head out of the thin sheet that was hiding them and attend to her actual work.

Even though they’ve been together for over a year, they enjoy the benefits of an open relationship. It helps to keep their sex life creative and inventive. They have sex very regularly - sometimes over 3 times a day. They enjoy bdsm and toys here and there, play a lot on the risky side and will do inappropriate things where it’s clearly not allowed and they can get caught. They would agree that they are both into kinky stuff, but their main focus is on having fun and keeping the sex intense. You can sense in their eyes a deep connection of trust and passion. 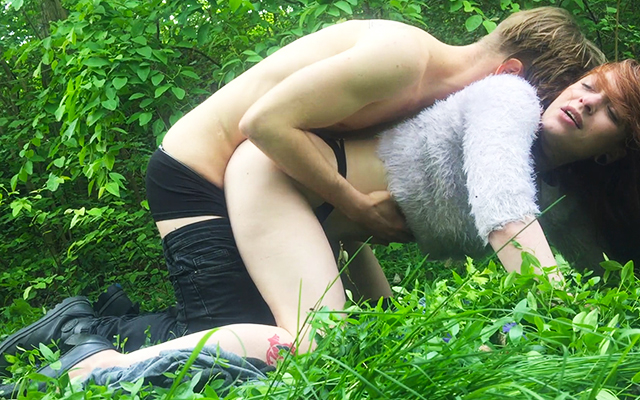 “We just fucked in a park”
Returning to Lustery for their second shoot, Lenore and Jack wanted to up the ante! Describing their sex life as experimental, they wanted to show the Lustery Community just now ‘experimental’ things can get. Walking through the woods, they find a nice quiet spot, out of the public gaze, the perfect location for this amazing video, enjoy!
Full video