The film is told through the interior monologue of its protagonist, Murphy, a self-absorbed character who quickly tumbles into the nostalgic reverie of the film following the news that his ex-lover, Electra, has gone missing. All this while his son and partner go on living in the flat around him. 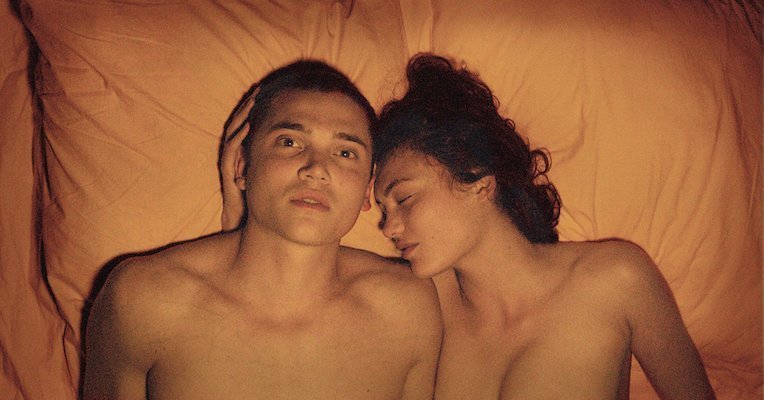 Murphy's thoughts of past love are awash with rose-tinted moments of intense feeling. The original use of 3D isn't just sexy, it allows the visceral quality of intimacy and memories, to remain intact. We are invited to join the beautiful young things while they fuck, fight, dance, and can even taste the cigarette smoke as it wisps across their bed. Immersed in the intense physicality of Murphy's world, there is something authentic to be found in these sensations, bodies, atmospheres. At the same time, we stand outside it all. The film is very aware of itself, with scenes carefully framed to look symmetrical and matching cuts steering us decisively through love scenes that dip to black like eyelids or the stuttering to and fro of memory. Despite at times feeling present in these moments, we are constantly pulled back and reminded that the imagery of Love has been chosen.

Of course, the person really making decisions is the film's director. Like Noé, Murphy likes to look at the world through a lens and wants to 'make films, about blood sweat and tears'. He takes photographs, looks at Electra the nude lover through a slide viewer, attributes the problems in their relationship to the fact she no longer has a long pony and now wears glasses... Meanwhile, Electra sees herself as an artist, which is what she sees when she looks at her pictures through the slide viewer, but Murphy only views her as a character in his fantasy about love. The film quietly mocks both Noé's pursuit as a filmmaker and our decisions to edit life in this way, trying to give fragmented memories our own meaning or a definitive title, like Love.

But the question was about 3D and the answer is yes, you can still watch this film on Netflix but you might miss out. Watching it on my laptop was ok as Murphy's memories are transfixed on my mind from my semi-physical, 3D experience of them. Without an opportunity to relate almost bodily to the yearning, pulsing, physical love, you are left only with an unsympathetic experience of its re-telling. It seems that the film wants you to experience both, to be outside and inside it, to feel torn between the truth of the physical and the memorializing of it.

Saying all that, the love scenes are long and generous, so if you don't feel too consumed by the artistic and existential crisis of the film there's plenty of material to enjoy getting a bit wet or hard to as well.

Fantasies of vanilla sex on a bed covered in ornamental pillows imagined via intensive self-pleasuring sessions that you eventually have to escape and return to the world.

11 likes
Share:
Olivia Rose
« One quarter of The Ersties Podcast and Video Editor of the lovely Lustery couples. Sexually oversharing for work reasons. » All posts →