I recently wrote about growing up afraid of sex and, more specifically, my sexuality. Because my own experiences were either shitty or non-existent, I found alternatives in Sex & The City, a show which is undeniably problematic but absolutely exceptional nonetheless.

Even though I get paid to write about sex and have been very, very drunk at lots of fashion parties, Miranda was the character I could always relate to the most – an overly cynical workaholic capable of polishing off a giant cookie in one sitting. Recently, though, a quote from PR goddess and resident nymphomaniac Samantha Jones caught my eye: "I will not be judged by you or society. I will wear whatever, and blow whomever I want, as long as I can breathe and kneel."

It's important to ask ourselves these questions. Despite writing openly about sex, I was judgmental of promiscuity for a while and for a number of reasons – sometimes it was jealousy; others it was insecurity; often, it was just plain ignorance. I always felt like I wasn't able or allowed to be promiscuous, partly because I knew people would start to weaponize the stereotype of the slutty gay guy against me. A lot of us grow up internalizing shame about our sex drive, and for a while, I just genuinely didn't want to sleep around. But then things changed. A relationship ended, I booked a three-month trip to focus on PhD work and found myself travelling alone with limited tools at my disposal to meet new people.

Dating and hook-up apps were one of these tools, and I decided fairly quickly that I wanted to use them. After a lengthy conversation with my grandma (we have an unconventional relationship!), I decided to download Tinder Gold and start actively dating for the first time in months. I had a few loose ends to tie up – namely a dead-end, long-distance fling– and a few initial shitty experiences (the guy that told me I was "fatter than he would have liked" after I made him cum six times was a particular highlight), but I quickly found myself tapping into my inner Samantha Jones. 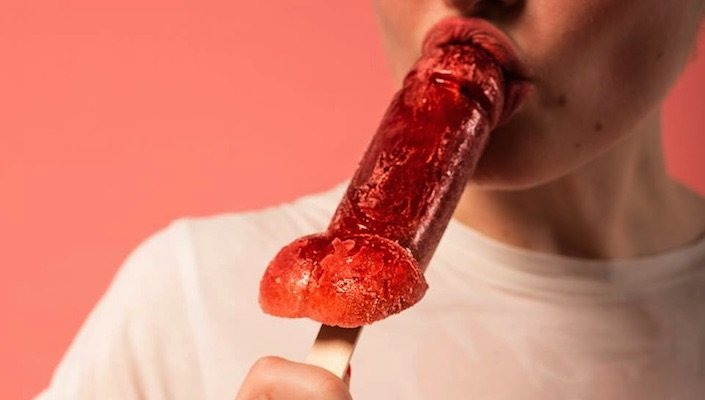 Dick pics were the first obstacle to overcome. I hadn't dated for a few years so I assumed maybe it wasn't 'a thing'anymore. I was wrong. My inbox started to fill up with blurry, extreme close-up shots of random men's junk – not the biggest turn-on. Even now, I'm firmly convinced that no great romance – or even great hook-up – began with a dick pic, so why are some men still so damn persistent?

On the other hand, there were men who actually wanted to know more about me before they wanted to see me naked. They asked questions, told jokes and sometimes shared pictures of themselves which weren't just zoomed-in shots of their urethra. I found myself relaxing into flirting, feeling increasingly comfortable and even inclined to exchange photos of my body with just a hint of a tease.

Sometimes this escalated and sometimes it didn't, but it was the first step towards actually feeling like I wanted to have sex with someone for the first time in a while. I would also wholeheartedly recommend nudes to anyone struggling with self-esteem, because they give you agency over the way your body is viewed. I used to steer well clear, but soon I found myself feeling liberated, empowered, even sexy.

If feeling sexy was the first step, actually having sex was the next. I was nervous, so I decided to have a few drinks and actually invite over a guy I had been chatting to for a while. There was a language barrier so conversation didn't exactly flow smoothly, but we had exchanged online messages about the things we were and weren't comfortable with. So, when he came over we watched Netflix for a while (basically a rite of passage) before making out, stripping off and then starting to explore each other's bodies. There was rimming, sucking, touching and two incredible orgasms – and then he left, I settled down to watch more Netflix whilst feeling strangely proud of myself for overcoming something which had bothered me for so long. I had hooked up with a guy (safely) and enjoyed it.

This became a catalyst for me becoming way more sex-positive. Plenty of guys followed, most of which turned out to be amazing sexual experiences. Even now, I usually go on at least one date because transparency and honest communication is, in my eyes, the key to a good fuck, but gradually I felt more comfortable in stating the kind of sex I'm into. Flirty conversations can lead to enticing ideas, and soon I found myself exploring kinks I didn't even know I had. By re-programming the way I think about sex – and letting go of all the bullshit stereotypes which had stopped me doing so for so long – I managed to embrace my inner Samantha Jones. It goes without saying – I would definitely recommend it!

5 likes
Share:
Jake Hall
« Jake Hall is a London-based freelance writer fascinated by everything from sex and sexuality to music and culture. » All posts →