"Nicholas turned his head towards me, breaking the kiss. 'Can you see well enough, Lucy?' he asked as James grabbed his cock and began to stroke him."
From We Love Lucy by Lilith Wes

We engage in some form of voyeurism most days; People-watching in the park, watching your partner sleep or undress, watching people on your laptop screen, glancing up to see your neighbours going hard at it against the window...

Why do we like to watch so much? Is it the delicious anonymity of having a front row seat but nobody to pick on you? Is it the temptation of 'look but don't touch'? Is it the taboo of seeing some private or forbidden world you weren't supposed to? Or is it the chance to insert yourself into a situation in whatever way your imagination chooses.

Of course, there is a disturbed side to voyeurism, somewhere in the region of peeping toms falling through ladies bathroom ceilings... But I'll leave that stuff to the experts.

No, you don't have to be a weirdo stalker watching somebody. There are a few different ways you can be 'hidden' as a voyeur.

Consider this: you stir in your sleep in a big festival tent. The couple sleeping closest to you have begun grunting and getting frisky in their shared sleeping bag. You decide not to be forthcoming about the fact you're awake, quietly watching and listening instead. The couple are enjoying the risk factor here and it's pretty safe to say they're aware people are watching and it's consensual. There's something exciting about the idea of secrecy nevertheless, making you lean in, listen closely, feel your senses more strongly, and that's key to voyeurism.

There's something very voyeuristic and hidden about being at the cinema too. Sitting there, cloaked in darkness, popcorn in hand, panties wet. Distance is key to voyeurism, separated by a screen, a cheeky crack in a doorway, a window. The action is both apart from you and framed to give away just enough. You get to enjoy the freedom to look without having to act. Maybe you'll discover through this, there are some things you're not into doing sexually, but you like watching them. 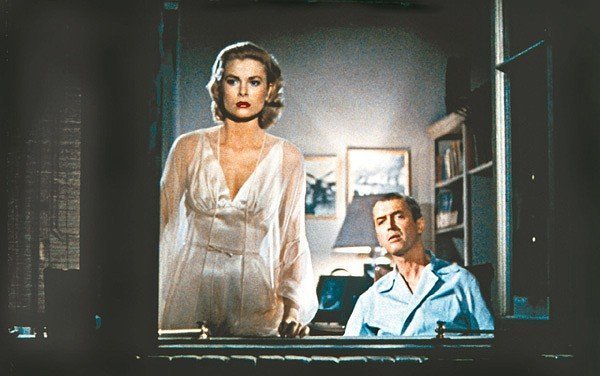 A film deemed 'not suitable' by a parent is irresistible to a child. Freud talks about voyeurism in children as an attempt to uncover what is private and forbidden, especially when it comes to gawking at other people's bodies. So there is often a play between pleasure and danger in voyeurism; the intrigue of finding out what goes on behind closed doors.

When you think about voyeuristic films you're met with a mixture of sensual and thrilling imagery as if the film's director can't help but tangle the two together. Take Hitchcock's Psycho, when Norman spies on Marion, both the sexual and sinister charge is present and one feeds the other. Trivia: Hitchcock used a 50mm lens on a 35mm camera to mimic human vision in these scenes so that we become voyeurs watching too.

We still have some kind of separation, though, as we don't have to do anything about the murder. Susan Sontag writes:

The darkest side of voyeurism and probably most often experienced as the male gaze watching an eroticized female - possession. In this situation the woman is objectified, she is not herself but the image of whatever fears or fantasies the viewer puts on her, a kind of power play. Marcel Proust writes, "In keeping her before my eyes, in my hands, I had that impression of possessing her altogether, which I never had when she was awake". A natural aspect of fantasy, this sort of behaviour may not end well in real life, unless you're both into it. In which case - go for it.

In movies, the voyeur often goes unseen behind a conveniently slatted wardrobe door, but that's not so common in real life. The good thing about that is the person being watched also gets to enjoy being seen, and there's a kind of amazing control that comes with that too.

"Can you see well enough, Lucy?"

A little to the left, boys.

A SHORT AND SWEET GUIDE TO COSPLAY